Altamira: ALPASA is now part of the gas pipeline project.

ALTAMIRA, TAMPS.- Once the company Shawcor chose Altamira as its logistic hub to receive, cover and supply pipes for the Texas-Tuxpan pipeline, a space was needed for the manufacturing process and storing of the covered pipes, which was solved by Almacenamiento y Logística Portuaria de Altamira (ALPASA), that rented some of their lots in the Port of Altamira.

Javier Casados, Director of Alpasa, during an interview for T21, said that the project called Bredero is being developed in a 109,000 sq meter lot, where Shawcor established the coating plant and also prepared it for storing, strengthening it to support the heavy pipes that uncoated weigh almost 11 tons, and coated over 20 tons.

"Our plus is that we can include construction as well as the land, and we have the availability to customize our clients' projects. We chose a lot free of customs control, with electricity, an area with capacity for more than 21 tons per square meter, that gives this project security in storing the pipes" he said.

Complementing this synergy, Transportes Privados de las Huastecas (TPH), another subsidiary of DPH Group, was in charge of moving the covered pipes from this point to the warehouse by the dock where these pipes are loaded to barges, and then transported to their place.

"A project this big is highly beneficial for every company in the port. It has undoubtedly been a huge job generator up to date. In our case we added 80 direct jobs, which creates great benefits in every aspect, as well as the projection Altamira will have in an international view", he said.

He also added that this project adds up to some other where ALPASA has participated in, specially for the Eolic market, for companies such as Vestas, Siemens, Gamesa and Acciona, among others. Last year, for example, ALPASA collaborated in a project that constructed 114 wind towers.

As a matter of fact Puertos Integrales del Sureste, another subsidiary of DPH Group and currently under construction, a private terminal that will be used to manufacture wind tower blades, besides third party cargo handling. In the South West of the Country ALPASA also has operations since 2008 through the Port of Salina Cruz where it has a contract to supply services for oversized cargo.

On the other hand, the company is also planning to build a plant inside the Inbound area in Altamira and take care of the automobile industry under this special customs regime.

"We've started talks with Customs to operate in this plan, we are somewhat advanced and expect in one or two months start formal operations, focused in automobile and petrochemical industries", said Casados Rodríguez.

ALPASA currently has in Altamira six lots, that mean different alternatives for cargo operation: Lot A is 30,000 sq. meters, 5,000 of covered warehousing and 25,000 open storage; lot B is 45,000 sq. meters, of inbound area operating a cross dock for the automobile industry and LCL, FCL, as well as breakbulk and project cargo.

Lot C, where Shawcor is, 109,000 sq. meters, can handle any kind of project, and lot D located in the RFE with 45,000 sq. meters with a 5,000 sq. meter warehouse, which is specialized in export cargo and automobile industry; the rest is used as container yard for MSC and Maersk Line; lot E for Hamburg Sud's and Maesrk; and lot F 85,000 sq. meters for containers and breakbulk.

This information is from a series of interviews that T21 made in a visit to the port to know the logistic project of the Texas-Tuxpan pipeline, same that is integrated in the July edition of T21 magazine cover, available in this link. This piece corresponds to the third piece of a a series dedicated to the port and the information here is additional to the one in the cover.

Altamira: ALPASA is now part of the gas pipeline project. 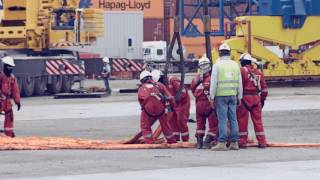